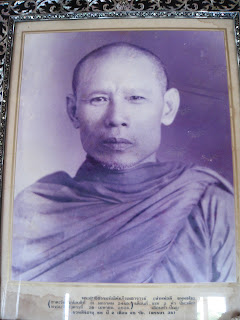 Luang Phor Lee, otherwise known as Phra Suddhidhammaransi Gambhiramedhacariya had passed away about half a century ago. Here are the pictures taken of Wat Asokaram- due to its popularity, ongoing development projects have been carried out in the temple: 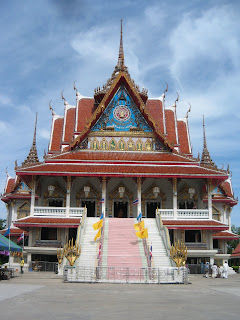 According to his autobiography writen prior to his passing away, Ajahn Lee had wanted a chedi to be constructed to house the Buddha relics to commesurate 2500 years of the passing away of the Buddha. The purpose is to repay a past life kamma (around the Buddha time or not long after the passing away of the Buddha, Ajahn Lee was also previously a monk in India. He was supposed to attend an important Sangha gathering but he played 'truant'). To repay the kammic debt, Ajahn Lee (who was well renown for his pyschic abilities during the 1930s to 1950s) must built a chedi. But his followers at that time disagree and believed that building a shrine hall (picture above) was more practical.

Ajahn Lee's message was not heeded. Not long after, Ajahn Lee passed away- at the age of 55 (if I am not mistaken). 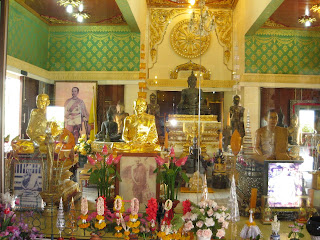 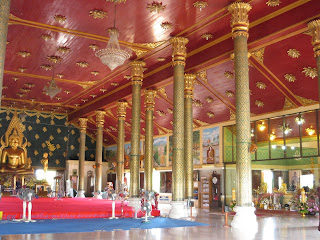 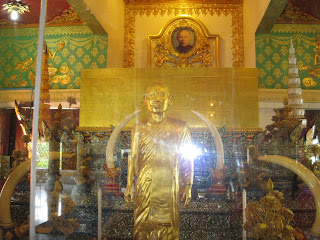 His body is still being kept today at the shrine hall as seen on the photograph above (the coffin lies behind the golden statue of Ajahn Lee). 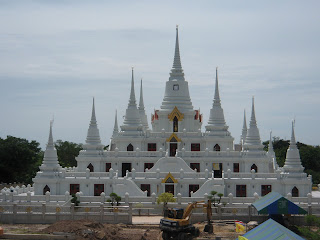 The construction of the chedi above only started after Ajahn Lee's death.
To read the teachings of Ajahn Lee online, go to Accesstoinsight.org> Thai Forest Tradition> Ajahn Lee. I started reading his books in 2001 - his books has provided a lot of solace and guidance at times when I needed it the most.
How to get to Wat Asokaram by public transport:
Not sure if it is still applicable, since I last visited the place in 2007
1. Take Skytrain to "On Nut" station (you can take from Siam Central BTS station). Get down and you will see the bus stop with Tesco located opposite the road.
2. Take bus number 511- cost 17.5 baht. The journey took more than an hour because of the jam. Get down when the bus reaches the last station.
3. From there, take a taxi to Wat Asokaram (around 50baht)
From Wat Asokaram, you will need to walk out about 150 to 200 meters to the main road to flag down a taxi. Or sometimes if you are lucky, you can get on a cab who happened to drop off a passenger.
Posted by Thai Forest Tradition at 12:23 AM

Several translations of Ajaan Lee Dhammadharo's teachings, along with other teachings in his tradition, are available through Metta Forest Monastery in California:
www.watmetta.org