Wat Pa Luang Phor Mun is located near Chiang Mai, Thailand. I got there by taking a bus from Chiang Mai (it is at a special stop by the river). The journey took about 90 minutes to reach a smaller town- then we took a trishaw to the temple.

It is the temple where Luang Phor Mun (Acariya Mun) is said to have achieved Arahantship: 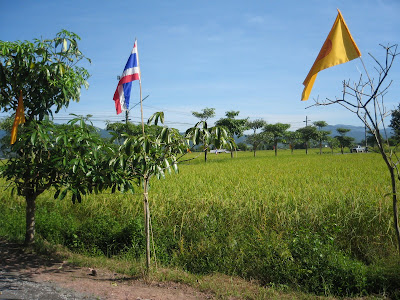 The scenic fields on the way to the temple. Even before I arrived at the temple, I was not sure why, but tears flowed down my eyes when I thought that once, many decades ago, Luang Phor Mun actually walked on these path to go to the temple. 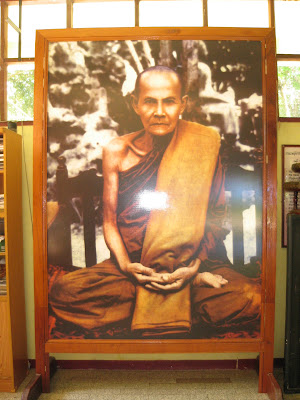 Potrait of Luang Phor Mun at a hall. 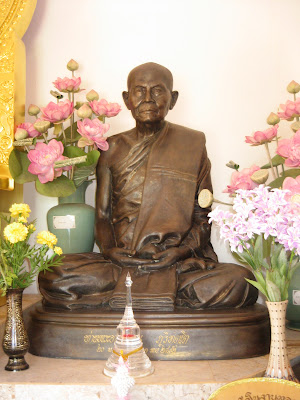 Bronze statue of Luang Phor Mun located in the chedi. The chedi is below: 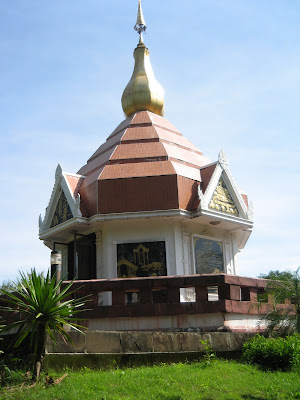 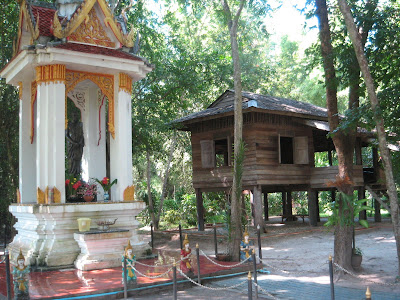 Above: The kuti where Luang Phor Mun had stayed when he was in this Wat. The white structure, shown again below, is the path used by Luang Phor Mun in walking meditation. 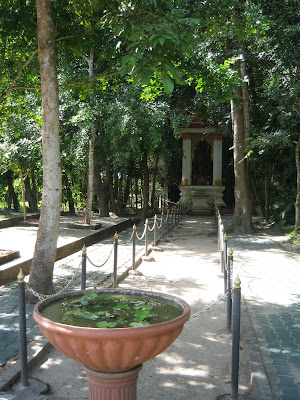 We met the abbot who is residing there. I am so sorry that I have forgotten to jot down his name. But he shared with us why he came to the temple:
Ajahn came because he heard that the temple was the place where Luang Phor Mun attained enlightenment. After staying for one vassa (rains retreat), he noted that there is no fixed resident monk there. He wanted to honor and take care of the place as he has deep devotion and respect for Luang Phor Mun. He has now taken care of the temple for the past 8 years.

Posted by Thai Forest Tradition at 8:06 PM No comments:

Observing the Precepts in the Real World

I know that sometimes, as a Dhamma practioner, we may be questioned by those around us, especially pertaining the practice of the 5 Precepts. I have a few personal experiences to share:

1. Ordering animals to be killed for food
Years ago, when I first started to work in my company and trying to fit in (with peer pressure and all those stuff), the group that I was trying to fit in finally included me in their outing at a seafood restaurant. Now, that restaurant serves live seafood- all you need to do is to point at fishes, prawns and whatever that are swimming in the aquarium to be dished out, killed and cooked. If you want to, the seafood can be cooked, fried alive right in front of you.

When I realised that, I told them nicely that I am not eating the food (of course, if I had knew we are going to visit this restaurant, I will not have gone in the first place). One of them, who knew earlier that I am a Buddhist, made fun out in front of everyone- as if I am making a big fuss on my precept (he is registered under his identity card as a Buddhist and know what are the 5 precepts but breaks most of them- really. That time, I was angry with him but I look back now with compassion and I felt genuinely sorry for him).

I must admit, I have quite a resolute character- so that evening, I only ate one dish- a plate of vegetables whereas my colleagues feasted on the fresh seafood. I did not feel like eating those seafood, even though when the bill came, it was equally divided and I had to pay for the share of food that I did not partake in. After that, I decided, well, this 'happening gang' is not really for me, furthermore, the topics they talked about (gossip, empty talk and someone's bf/gf) does not appeal to me. In the end, I made friends with colleagues who are not considered 'happening', but made great friends. We constantly helped and covered each other at work, we also shared our personal lives- with each other, we need not be 'cool' or expensively dressed.

2. Another topic constantly being debated is social drinking. Now, the 5th Precept mentioned that one should not drink alcohol. And many people love to argue about this fact- and say things like, well, can't we just bend the rule a little? After all, we have to drink to entertain our clients, etc etc.
For me, I used to work in an organisation that believes in this motto: "Work hard, play hard". So, when it comes to company events or teambuildings, the booze is always 'on the house' and flowing all night. I've to attend many of such events but I never touched alcohol no matter how much of social pressure it is on. It's very simple, if you have desire to drink, you will try to give yourself all kinds of excuses. But if you are determined to observe the precept, you will stay off the booze- you will not give yourself excuse to drink.
I have learned that if you really do your work well and is a good and valued employee, no one cares if you choose not to drink. Your bosses will be too worried that they may lose you and will never want to even risk upsetting you by forcing you to drink. Also, if you choose your friends carefully, you will find those that do not live for the bottle. And you will not be seen as weird if you do not drink.
Away from work, my university friends (we still keep in touch) all know very well that I don't take alcohol. Sure, at housewarming parties, birthdays and weddings, everyone will toast with a glass of champagne but they are pretty much used to having me toasting with them holding a glass of orange juice, Coke or Chinese tea. No one took any offence.
Real friends accept you for who you are. If they don't, well perhaps, you need to look elsewhere....trust me, it pays off in the long run to invest in 'real' friends rather than fake ones.

3. The precept of lying
A confession that I would like to make: in my initial years of following the Buddha's teachings, I often break this precept. In fact, I was so used to lying that it came automatically- so much so that I can look at someone in the eye and lie convincingly. That time, I observe all the other precepts except for lying. Not just white lies, mind you, but I find myself telling lies even to my friends. Then you wanna know what happened?

I started getting a lot of lies in return where it hurts the most- love relationships and those whom I thought were my friends. Some people that I thought I could trust and love ended up hurting and betraying my trust. Then one day, an insight just arose: "if you want truth in your life, you must give the truth". I was tired of getting hurt and betrayed by people that I trust- so I made a resolve to be truthful. Whatever I told, I want to tell the truth. I learned to be humble and admit my mistakes and shortcomings- instead of covering it up with lies.

If you want to say that "we need to work for a living, and very often, we have no choice but to lie.". Now, in my job, technically, we would often had to be put in a situation where we had to tell 'white' lies to customers- sometimes to save our company from incurring huge complaints. Sometimes to make excuses for the company when it gets too money minded and implement things that is well against the best interests of the customers. Still, I was able to overcome this obstacle most of the time- by learning other means such as being more tactful in my speech, more emphathy and just be less egostical and apologise more. You will be amazed- if you were to go right out and admit mistakes, apologise with sincerity, listen more with empathy and inform the person what you are doing to rectify it and to prevent future occurances- you will often get a positive response. Being defensive and covering up mistakes with lies and excuses often gets you no where because everyone's so sick of hearing excuses. I mean, how often whenever something goes wrong, and when you call up the company concerned to check, all you get are excuses?

Still, I had to live with the 'after effects' for about 2 to 3 years (till I pay off the kammic debt, I guess) from the time I started becoming truthful. But I could see that more and more better and truthful people started entering my life as I started being more truthful myself. I still ended up being deceived and lied to but it was getting lesser and lesser with time.

As such, I find that it doesn't pay to lie- even to tell white lies. After that, I find that even people who meet me for the first time instinctively tend to trust me.

I am sharing this not to show off, but to relay my personal experience- and to show that it is possible to live and work in this world and yet observe our Precepts. The 5 Precepts make us human- if we deviate from it, it makes us less and less human. Also, we sleep better at night, feel more protected and peaceful. If we were to meditate, we can progress faster and better compared to someone is not observing the precepts.

Additional Inspirations from Ajahns of the Thai Forest Traditions:

Advice by Ajahn Lee in the book, The Skill of Release
Someone once came to Ajaan Lee with a problem. Some of his friends had said to him, "If the body's not-self, why can't we hit you?" Ajaan Lee said to answer them by saying, "Look. It's not mine. I've borrowed it, so I have to take good care of it. I can't let anyone else mistreat it."

Advice by Ajahn Fuang Jutiko (disciple of Ajahn Lee) in the book, Awareness Itself :

One of Ajaan Fuang's students — a seamstress — was criticized by a customer: "You practice the Dhamma, don't you? Then why are you so greedy, charging such high prices? People practicing the Dhamma should take only enough profit just to get by."
Although she knew her prices were fair, she couldn't think of a good answer, so the next time she saw Ajaan Fuang she told him what had happened. He replied, "The next time they say that, tell them — 'Look, I'm not practicing the Dhamma to be stupid.'"

I recommend both of these books as they contained meaningful and insightful excerpts- you can read both The Skill of Release & Awareness Itself online.
Posted by Thai Forest Tradition at 10:20 PM 2 comments:

Pictures of Luangta at various age 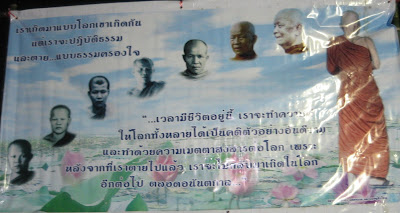 The photo above is taken from a poster at Wat Baan Taad on Kathina showing Luangta at various stages of his life. He is now ordained for about 73 years.
Posted by Thai Forest Tradition at 10:30 AM No comments:

Here are some of the photos of the Kathina held in Wat Baan Taad, Udon Thani on 18 October 2008: 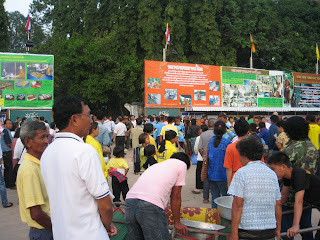 Above: Morning pindapat on 18 October 08- Monks going on alms round. There are a lot of people there for the annual event. 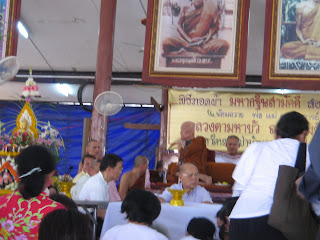 Above: Luangta sitting at the hall. 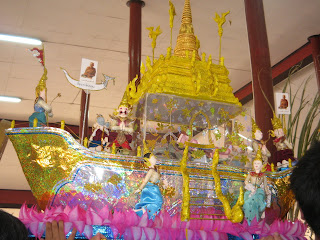 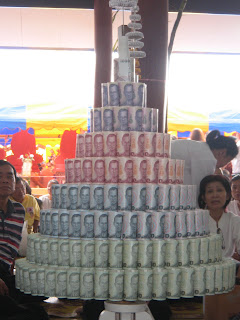 Offerings for the kathina. 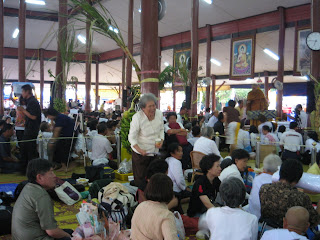 Posted by Thai Forest Tradition at 10:18 AM No comments: