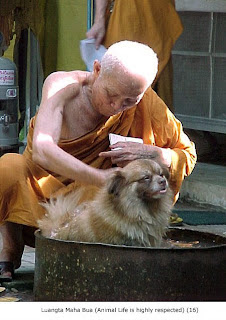 During my last trip to Wat Ban Taad last year, I did not see the cute doggie, so I inquired as to what had happened to him. I was told that he was pinned down by a lorry and died. I felt so sad that I will never see him anymore.
Posted by Thai Forest Tradition at 7:32 PM No comments:

The Power of Aspiration

I cannot read Thai but Khun Mer, a Thai mae chi shared with me the story about Luang Por Mun.

During the time of the Buddha, Luang Por Mun was a rich man and inspired by the Buddha's teachings, he gave up his wealth and seek ordination with his wife. As he was old, he was not able to learn the Dhamma as much as he would like to. But in that lifetime, he had made an aspiration to become the future Buddha.

So through about 2500 years, he went through the cycle of life and death- till he reached his final birth and was born in Ubon Ratchathani (North East of Thailand) in 1870. He ordained as a monk at the age of 22 and practiced with dilligence. He remembered back his past birth during the Buddha's lifetime. It was during his final lifetime, he gave up his aspiration to become the future Buddha but instead, to end the cycle of rebirth and death.

Khun Mer said that in my previous birth, I had known Ajahn Mun and did dana and paid respect to him. But I was probably too old to be able to learn the Dhamma well, still, the respect I had for Ajahn Mun had always been deep.

I remembered as a university student, I went to the religion section of the library and picked up the copy of his biography (the initial thin version- dark green cover). To be honest, when I first saw Ajahn Mun's picture, with his piercing and all knowing eyes, I was a bit unnerved. But I read the stories and one particular story of him and his spiritual partner was very touching. The story stuck in my mind for many years, till I pick up the copy of his Spiritual Biography writen by Luangta. That book changed my life.

Aspirations are very powerful- when the Dhamma inspires us and we make aspirations to be able to know the Dhamma and meet good teachers with the sincerity of our hearts, it comes true and we are once again reunited and get to pick up from where we have left. No distance, language, background, religion can separate us.

For instance, Ajahn Pannavuddho, who was from Britain and was a qualified engineer, eventually ordained as a monk in Thailand. When he met Ajahn Maha Boowa (Luangta), he immediately wanted to follow and stay with Luangta. Luangta, had his reservations at first because of the language barriers and did not accept his request for a few times. But Ajahn Pannavuddho was very determined, he went to Wat Ban Taad a few times, stayed and leave when it was time to go, and go back. Eventually Luangta accepted him and Ajahn Pannavuddho stayed with Luangta. Ajahn Pannavuddho passed away in 2004 in his nineties (I am sorry, I cannot remember the exact age). Ajahn Pannavuddho learned Thai and as the word spread to his homeland in England, foreigners started coming to visit Luangta, since there is now someone who can teach in English. Today, when you go to Wat Ban Taad, there will be English speaking monks and lay people (foreigners) staying at the wat.
Posted by Thai Forest Tradition at 7:07 PM No comments: