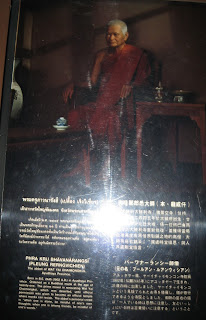 Ordained as a Buddhist monk at the age of twenty one. The prime mover in renovating Wai Yai Chaimongkol, which was deserted, until official permission was given to become and official temple where monks can reside. The abbot's personal creed is "when one is alone, be mindful of one's own thoughts, when one is among friends, be mindful of one's words."
Posted by Thai Forest Tradition at 11:56 AM