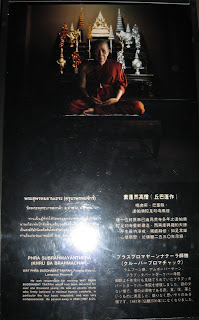 There are many famous monks revered amongst the locals but not known to the outside world. Another one is Phra Subrahmayanthera (KruBaBrahmachak). Click to enlarge the pictures. The description is as below:
Wat Phra Buddhabat TAkpah, Pasang District, Lampoon Province.
He was responsible for reviving Wat Phra Buddhabat Takpah which has been deserted for over one thousand years. He was an ascetic monk who firmly believed in minimal human comforts, in particular the four basic requisites, and was very compassionate. He passed away in 2530 (1987 A.D).
(Click on the picture above to read the version in Thai, Mandarin and Japanese language. )
Posted by Thai Forest Tradition at 11:52 AM

Correction: actually he died in the latter part of 1984.