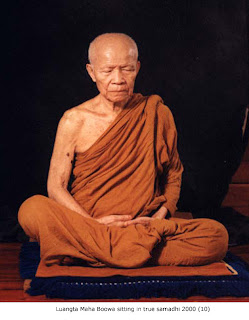 My deepest and sincerest gratitude to Luangta, whose book, the Spiritual Autobiography of Ajahn Mun had changed my life forever and made me travelled to Wat Baan Taad to see him personally. I had to go through a series of obstacles, including not being able to see him the first time- in fact, a week before I was due to travel to see him, I had a strange dream. In the dream, I cycled to a temple with my heart wanting to see Luangta. As I arrived in full anticipation, I opened the door to see a number of old monks sitting together. But in the dream, I knew in my heart that Luangta was not there. In the dream I felt so disappointed.

The dream came true. A week later when I travelled to Wat Baan Taad in Udon Thani to see him, he had went to Bangkok. In that trip to Thailand, we have visited other temples and yes, as the dream had foretold, I've met a number of elderly monks. But as I walked into his temple, feeling so disappointed that I was not able to see him, I felt in my heart that if I am sincere and come back the second time, I will see him.

I did, and I came back the second time. I remember as I carried my bags towards the hall- it was morning and he was having his morning meal. The first time I saw him, I knew- I knew... all the effort, everything.... it was all worth it. That was year 2005. I've never looked back since.
Everything in life that we want to do, there will be naysayers to discourage us. If I had listened to what others had say or go with the flow of the world, I would not be the person I am today.

Thank you, Luangta, for inspiring me to practice the Dhamma through your writings. I am a better and more peaceful person because your teachings has touched my heart. We are indeed fortunate that we live at this age and time when we can still see you in person. A living proof of someone who had undergone tough dhutanga (astetic) practices of the Thai Forest Tradition. It is true that one is able to live in this world and be a good person practicing the Dhamma, even amongst others who doesn't practice.

Note: Ajahn Mun (Luangta's teacher) passed away when Luangta was in his early thirties. The legancy Ajahn Mun lives on through Luangta's teachings. When Ajahn Mun passed away in 1949 at the age of 79, most of his close disciples were about late 50s or older. If Luangta had been around the same age as his teacher, we would not be as fortunate as we are now.
Posted by Thai Forest Tradition at 1:00 AM