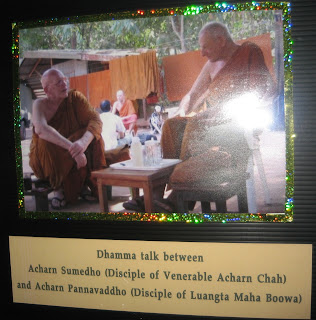 So it is essential to understand that the kilesas are in the citta and not in the khandas. But the khandas take n those aspects of the kilesas which the citta makes them take on. For instance, anger. Anger starts off in the citta. This triggers a response in the khandas. First of all, consciousness become aware of it, and memories associated with it begin to arise. Then the thinking process builds it up and causes anger to increase. Then feelings arise. These feelings came from the anger inside the citta. This brings us back to the citta and the kilesas. The kilesas are the things that push us around all the time. And the whole purpose of the Buddha-Dhamma and the Buddha Sasana is to get rid of those kilesas.
Posted by Thai Forest Tradition at 6:03 PM