Note: Even though Ajahn Sumedho was very humble and open about his experiences, it was said that Ajahn Chah already knew of his arrival long before he met Ajahn Sumedho. Ajahn Chah actually had a kuti built where the door was six foot tall (so that Ajahn Sumedho, who is very tall, would be able to get in). Supporters had asked Ajahn Chah why built a kuti with such a tall door when the average Thai is usually not that tall.

I was told that Ajahn Sumedho had the parami to be able to help spread the teachings of Thai forest tradition to the West. It is not a light task for initially when Ajahn Sumedho first went to England, the tradition of going for alms round and other aspects of Vinaya (monastic conduct) were literally unknown in Britain.

Ajahn Sumedho had humbly shared that initially, he had a lot of doubts and questions in his practice- Ajahn Chah could read his mind and thoughts and taught him with compassion. Because Ajahn Chah knew that beneath all that doubt and uncertainty playing in his student;s mind, once he understood, Ajahn Sumedho has the profound wisdom and the ability to translate the teachings to the English speaking world- in the language that they will understand.

The good teacher has the ability to know his student's hidden potential that is covered up under all that layer of dust and dirt. And the teacher knows that once these layers are peeled off, a rare diamond would emerge. But to peel off those layers require skills- knowing the student's thoughts, seeing his past and realising his potential, and having the compassion and patience. Today, such teachers are exceedingly rare.

And the student is lucky enough to find that teacher, he may not realise it at first. All he may see initially is the struggle and the feeling that he just want to give up the fight. But if he stays around long enough, he may finally realise the profound compassion and effort made by the teacher. The gratitude felt would be enormous that the student would not hesitate to lay down his life for his teacher... just like how Luangta had expressed about his teacher, Luang Phor Mun.

An article appeared on a paper that I want to share with the readers:

Original article published in The Star paper (Malaysian paper) on Saturday, 9 January 2010 in conjuction with Ajahn Sumedho's visit to Malaysia.

Ajahn Sumedho aka Robert Jackman remembers his guru and his own novice days.

From the navy to the monastery, from an American city to the forests of Thailand — the trajectory of Ajahn Sumedho’s life is interesting, to say the least.

Born Robert Jackman in Seattle, Washington in 1934, Ajahn (a Thai honorific title for “teacher”) Sumedho served four years in the US Navy as a medic. He also served in Sabah for two years in the Peace Corps in the early 60s.

However, despite being a Buddhist for over four decades and a highly regarded monk at that, Ajahn Sumedho still looks like a Mat Salleh in monk costume. Of course, this could be because we are so familiar with the traditional image of monks as Asians. 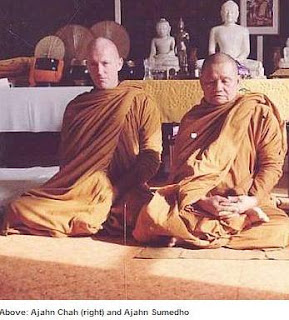 Even so, Ajahn Sumedho recalls how wearing the robes irked him when he was a novice monk in Nongkhai in northeast Thailand back in 1966.

“We had to wear three robes on our morning alms, and I used to complain as we were hot and clammy by the time we returned to the monastery,” says the affable abbot of Amaravati Monastery in Hertfordshire, England.

“The robes were dyed with a natural jackfruit dye, and the mixture of sweat and jackfruit dye smelt terrible. Life seemed to centre on robes, washing and mending them. I protested as I wanted to meditate.

“I also refused to wash the feet of senior monks. As an American, I was raised on egalitarian ideals, and washing another man’s feet seemed outrageous. When I left Nongkhai to join Ajahn Chah, 30 monks would rush to wash his feet after he returned from trudging barefoot through paddy fields and dirt tracks.

“Not me. I thought it was stupid and boosting Ajahn Chah’s ego,” he recalls.

The food also did not suit Ajahn Sumedo’s palate, but monks, then as now, have to eat whatever the villagers offer.

“The villagers brought chicken curry, fish curry and frog curry, but in those days Ajahn Chah would dump them all into one big basin and mix them up. It tasted horrible! The nuns would bring roots and stems from jungles for us to eat. I remember writing to my mother, ‘I am living on tree leaves’, and got her worried for nothing.”

It was the wise Ajahn Chah who helped remove the murkiness clouding the young American’s mind.

“I was frustrated by the strict monastic codes of Vinaya based on the hierarchical structure of seniority. There was a selfish side in me that wanted to live a monastic life but on my own terms.
“My complaints were gnawing me from inside — all the whining, whinging, blaming, thinking I was right, getting fed-up, being un-cooperative, wanting to leave.

“I realised that even when I led a comfortable life, I already had the habit of complaining and looking at life critically. Ajahn Chah showed me a different, positive outlook. Instead of being self-centred with the ‘get rid of this and get more of that’ attitude, I began to see life as it is, filled with ups and downs.

“I learned to welcome the chance to eat food I didn’t like, welcome wearing three robes on a hot day and welcome discomfort. Life is like this. Sometimes it is nice, sometimes horrible and most of the time, it is neither one way or the other!”

Meeting Ajahn Chah
Religionists are convinced that they will meet the teacher who will guide them when the time is right. Likewise, Ajahn Sumedho, who lived alone after his ordination as a monk, hankered to meet his teacher.

Phra Summai took him to Wat Pah Pong in Ubon province, where he remained under Ajahn Chah’s tutelage for 10 years. Again, it was tough going. Ajahn Chah spoke only Thai all his life, and Ajahn Sumedho only English! It was years before the latter learned Thai.

“Ajahn Chah would give long dharma talks in the evening, sometimes four to five hours, and I couldn’t understand a word! I was bored, cramped and upset. But at the end of one sermon, he looked at me, smiled and asked, through an interpreter, how I was doing. To my surprise, I said, ‘Fine’ and suddenly all my frustration disappeared!

“That was the beginning. He pushed me to the edge to make me see reality and what I was doing. I trusted him absolutely, and soon my aversion to washing his feet fell away and there were 31 monks rushing to wash his feet when he returned from alms!”

As for the language gap, the American understood more than what he was told via translation.
“We could not hold a proper, in-depth conversation in the beginning but he always said ‘Sumedho learns through the language of dharma’, and people would ask ‘What language is that?
“He said, ‘That is the language of living and observing, learning through awakening and being conscious, of having a human body and experiencing feelings that include greed, hatred and delusions, all normal human conditions’.”

Ajahn Sumedo began to see the bigger picture. Once he was asked to give a dharma talk for three hours.

“I had to speak and watch people leave or lie on the floor and sleep in front of me. At the end of three hours, there were just four polite old ladies!”

That was when he realised Ajahn Chah wanted him to examine the various forms of self-consciousness from conceit, vanity, pride, posturing to grumbling, and even the yearning to please and receive approval.

“I am grateful to Ajahn Chah because of his compassion.” says Ajahn Sumedho simply.

Why Buddhism?
“Buddhism offers the path to liberation. I was a Christian but became disillusioned as I could not understand its teachings nor find someone to guide me. Buddhism does not force you to accept blindly but to find the truth through your own experiences, and it was such a joyous discovery,” beams Ajahn Sumedho.

Here are some pearls of wisdom from him for parents:

“Parents have ideas how their children should be. If their kids don’t fulfil their expectations, parents feel angry and frustrated. And then, they are no longer loving them,” says Ajahn Sumedho.

“Attachment to children in this way no longer allows us to love them properly. If you let go of attachment, you will realise a natural way of relating is to love, and you become aware of them as they are, not as you visualise them to be. Of course these two can often be the same.”

On happiness, he says, “Please realise that ‘happiness forever’ is an impossibility! But neither is unhappiness! As a child, I wanted a toy so badly I told mum I would never want anything else.
“So mum bought it, and I derived happiness from it . . . for maybe five minute, before I started craving something else!

“I remember this vividly because I was so convinced permanent happiness was mine once I got that toy.”