If you wish to visit Wat Baan Taad, you can either buy bus or train ticket to Udon Thani from Hualampong station.

You can get to Hualampong station which is Bangkok's central railway station by taking the AE4 airport bus from Suvarnabhumi airport for 150baht (note: the ticket counter is located near the Magic foodcourt in the airport. Don't respond to touts. Instead, go straight to take the elevator down).


Here's a picture of how the train ticket looks like (found these tickets while doing some housecleaning): 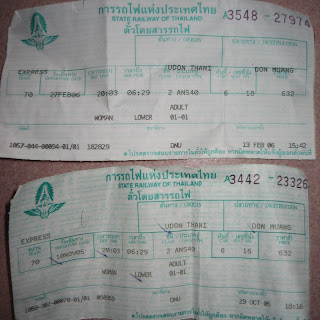 P/S: Notice the ticket indicates from "Don Muang"- this is because when I initially travelled to Wat Baan Taad, the new airport is not ready yet. All I did was to take a flight to the old airport, Don Meung, get down and take the overhead bridge to the adjoining train station. Now Don Meung does not handle international flights anymore. So your train ticket will have to originate from Hualampong instead of Don Meung.

Posted by Thai Forest Tradition at 10:13 AM